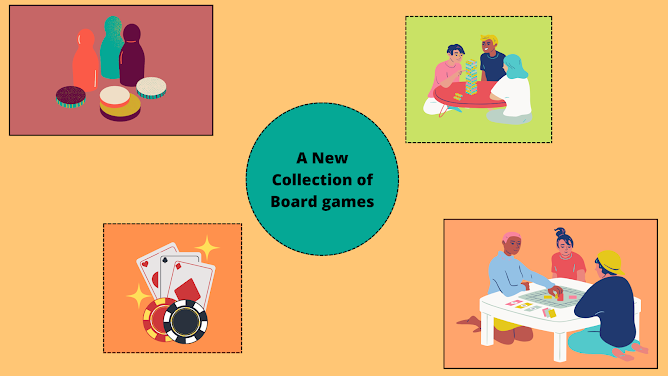 The Ventress Memorial Library is currently adding more board games to our collection. The board games were donated by The South of Boston Board Game Meetup. The games were processed and cataloged with help from teen volunteers and teen interns. The board games will be kept on the shelf outside the teen room. A few games will be shelved in the children's room. Some games that we will be adding are:
And many more!! So come on down to Ventress Library and enjoy our new games, crafts, books and lots more!
at June 19, 2022 No comments: 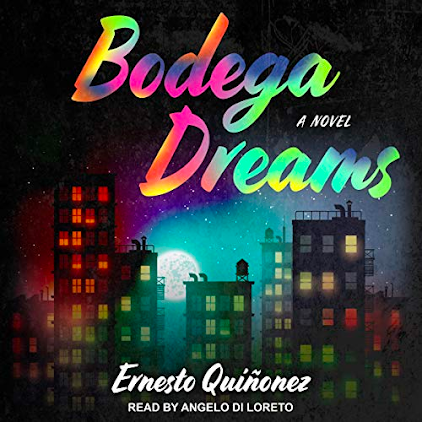 Plot: Set in Spanish Harlem, the novel follows Chino, a young man who crosses paths with Willie Bodega, a dreamer, activist, and drug lord all in one. Sapo, Chino's childhood friend, helps Chino set up a meeting with Bodega since Sapo works for him. Eventually, Bodega helps Chino and gives him a spacious apartment to live in with Blanca and their baby, who is soon to be born. Even though Blanca, Chino's wife, is against him being around Sapo, Chino still hangs out with him, but keeps the fact that he is linked with Bodega a secret. But when a dead body is found in a river, Blanca is skeptical about what Chino is really doing, and Chino even believes Bodega did it. So, what will Chino do: risk his marriage with Blanca to return the favor he owes Bodega, or cut his ties with Bodega altogether before the police becomes involved?

Personal Review: I enjoyed the novel, it was well-written and was a fun read, with some interesting plot twists. The novel helps portray difficult decisions people have to make in life, and they won't always be the right ones.

"If He Had Been With Me" by Laura Nowlin 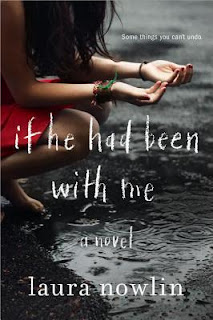 💬:   Autumn and Finn were best friends. For the longest time, they had been inseparable. Everything they did, they did together. Their relationship seemed like it would never break. Until it did. They grew up and apart for seemingly no reason at all. But that's just one of the harsh truths of life, right?

At the start of their freshman year, nobody remembers, or can tell, that the two of them had been good friends. Autumn has a boyfriend and a close group of unique friends. And Finn is that boy. The one that has people around him constantly. The one that lots of people want to be friends with. Naturally, all of Autumn's friends strongly dislike him because of this popularity and because of the people he chooses to hang out with. Despite their differences in friend groups, Autumn can't help but feel the growing and nauseating feelings of regret over their lost friendship. Why did they have to stop being friends?

As time passes, Autumn realizes that she must restore her friendship with Finny before it's too late. Because, after all, fate doesn't wait or anyone.

A beautifully written coming-of-age/ love story,  If He Had Been with Me is a story that will stick with you for awhile.

❤: Where do I even start about how much I loved this book? The harsh portrayal of growing up in this novel is fantastic. I usually look for relatable and realistic characters in the books I read and this one has so many. None of these characters are perfect, which makes them 100% more enjoyable. They each make tragic decisions, as do most teenagers do in their high school years. This is a heartbreaking tale of young love that I think all young adults should read. It teaches valuable lessons about time, love, friendships, and the miserable feelings that all teenagers feel while going through high school.  I will warn all who reads this book: make sure you don't read this in public because you will most likely cry.

💘: My favorite character by far is Finny, who doesn't let his popularity change his kind heart or his caring nature. He is kind and respectful to everyone, especially Autumn. He is the ideal best friend- someone who is there when you need them the most (even if you haven't spoken in a long time).

The Poet X by Elizabeth Acevedo 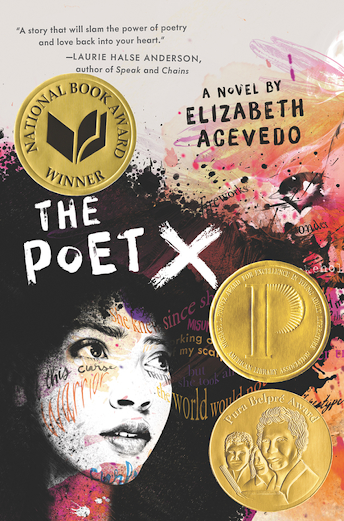 Plot: The Poet X by Elizabeth Acevedo is an amazing story told from the point of view of Xiomara, a 14 year old girl that lives in Harlem. The book is written in free-verse poetry, which is a poem that does not rhyme, and has different length in every line. The story follows Xiomara's life and her struggles, such as dealing with sexual harassment and her mother's extreme behavior. The book is written in poetry because that is how Xiomara expresses her thoughts. Xiomara loves poetry, and it is a way for her voice to be heard, and every teenager needs their voice to be heard. The Poet X shows the perspective of a teen, which helps other teens find themselves in a novel, and helps let them know that their story does matter.
Personal Review: I really enjoyed this book, it perfectly portrays the good (and bad) decisions made by teens every day.
at March 30, 2022 No comments: 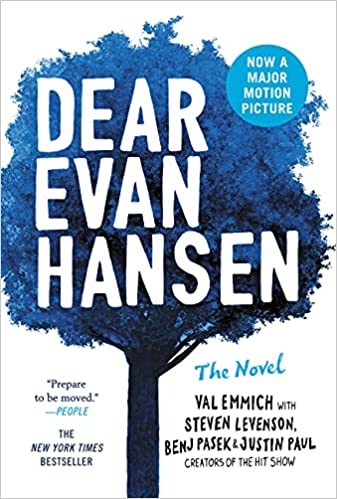 💬: Anxiety. Depression. Medication. Self-doubt. Low confidence. Broken arm. Sweaty palms. All of these things are daily problems for high school senior Evan Hansen. After writing a letter as a form of therapy, Evan suddenly finds himself in the principal's office sitting across from the Murphy's. After losing their troubled son Connor, the Murphy's are struggling to piece together the details of Connor's life outside of home. And when the Murphy's see Connor's name written in big letters across Evan's cast, they assume that Connor and Evan were friends.

But this isn't the case.

Evan and Connor weren't friends at all. In fact, they didn't even like each other and got into an altercation the day Connor died. Connor had signed Evan's cast without asking, mainly out of spite. Evan tries to explain this, but can't seem to say no to the grieving parents. Evan sends himself into a serious game of pretend when he tells Connor's parents that he was Connor's best friend. After word gets out about this, people start looking at him in the hallways. And suddenly, Evan doesn't feel so invisible anymore. Everyone takes notice of him- even Zoe, the girl he likes. He spreads awareness of Connor's death around school and with the help of a few others, he manages to get the message all over the internet. Thankful, the Murphy's invite Evan to their house multiple times a week just to hear him talk about their son. As Evan spends more and more time with them, he starts to realize all the anger, regret, and confusion they are feeling. He knows what he's doing is wrong, but he's helping them. Isn't he?

As the lies keep growing and growing, Evan finds his secret to be untamable. And as people start to question his credibility, Evan comes face-to-face with his biggest obstacle of all: himself.

❤: Not many books get me to cry. But this one did. To me, this story is a unique exploration of grief and sadness. Not just for the Murphy family, but for everyone in the story. The best part of this book, in my opinion, was its characters. My favorite character by far, Zoe, has so much depth and character development. Her story is so devastating and heart wrenching, but she is still a kind person. Her reaction to grief was so real, that it made me tear up a lot of times. Also, though I don't agree with anything he did in the book, Evan's character is so unique and sad that I couldn't help but feel sorry for him as more and more of his past was revealed. Evan's mom, Heidi, was another realistic character. She was just a mother who wanted the best for her kid AND for herself. And though Evan didn't always see it, she was doing her best for him.

"A Danger to Herself and Others" by Alyssa Sheinmel 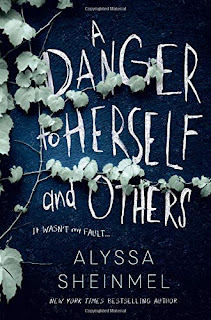 Trigger Warning: Mental Health Issues, Eating Disorders, Mentions of Suicide
💬: To Hannah, the decision to have her institutionalized was wrong. What happened to her best friend Agnes was an accident. Nobody was meant to get hurt. And as soon as the doctors realize that she isn't a danger to herself and others, she'll go home to start her senior year of high school. Those college essays aren't going to write themselves, after all! Until then, she plans to get on the good side of Dr. Lightfoot, her personal psychiatrist, and to get out of her dull, boring room as much as possible. As time goes on, Hannah notices new things about the institution. Girls with eating disorders eat at a special table in the cafe (if you're allowed to go there). Somebody always supervises the showers (if you're allowed to take one). Talking circles are with people who go through the same experiences as you (if you're allowed to be there). Going outside is allowed (if you have permission, of course). The more time she spends at the institution, Hannah wonders what she has to do to get those privileges and spend time with some of the girls there. Seriously. This whole "alone" thing is getting real old.

Lucy becomes Hannah's new roommate and a replacement of her former best friend. Though Lucy seems just as troubled as Hannah, she helps Hannah confront the harsh truths that wait for her outside the doors of her small room in the institution.

❤: What I loved most about this book was the author's ability to make you feel a wide range of emotions toward a single character, specifically Hannah. Hannah has a drastic change throughout the novel, going from a narcissistic, egotistical and privileged girl (this is honestly one of the biggest examples of an unreliable narrator I've ever seen) to someone you could sympathize with and possibly relate to. Hannah's change throughout the novel is so genuine that it's impossible to not love her by the end of the story. At first, she narrates her story as if she lives a perfect life and is proud of all the terrible things she has done. By the end, she knows that her life isn't as perfect as she thought and that she was going to have to work to make herself a better person. And I LOVE when characters go through major changes like that. I highly recommend this book to anyone who enjoys a story of transformation, someone who can handle dark elements (as listed above) and someone who enjoys a whole bunch of twists in their stories.

The Leaving by Tara Altebrando 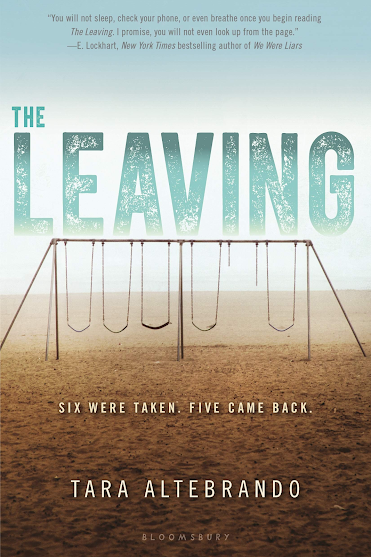 Plot: The Leaving by Tara Altebrando is about 6 kindergartners who went missing and weren't seen for 11 years. However, only 5 of them return. Max is the only one that stays missing. Scarlett comes back to a family that she barely remembers. Lucas remembers Scarlett, and the other kids, but does not remember or know what happened to them. Avery is Max's sister, and she wants answers as to why he was taken but hasn't returned. The book is told from the perspective of Scarlett, Lucas, and Avery as secrets are revealed and the mystery of Max's disappearance is unraveled.

Personal Review: I liked this book, and it was enjoyable to read. The plot twist in the end is amazing, very unexpected, and leaves you in shock. This book is a thrilling roller-coaster ride, and once you start reading, you won't be able to put this book down. It will leave you asking for more!